"Memories"
According to the meetings and testimonies of the elders of the ICAS of MACS, the EHPAD of Capbreton (Our Lady of the Apostles and The Green Ray) and Saint Vincent de Tyrosse (The Chênaie). This exhibition is the result of a project carried by the culture department of MACS in partnership with the cities of Capbreton and Saint Vincent de Tyrosse. Hosted as an artistic residency at the MOP in May 2018, the artists of Cie Hors Sujet worked on their play "LE BEL AGE". These artists wanting to keep current thinking about the place of the elderly in our society, have wanted to improve their actress game and confront it to the public eye. At the heart of their preoccupations are the elderly, old age, life, memories in order to approach with more lightness and humor questions about the end of life. Two residences were held in EHPAD and a public at the Grand Screen Cinema of Saint Vincent de Tyrosse. The artists then questioned the volunteer elders to collect and record lyrics as a true Human Heritage. Adding the look of photographer Jean Hincker during these different stages allowed to immortalize glances, postures but also to highlight the Humanity that emerges from these people who have lived so much and who often remain humble and silent. Black and white allows him to get to the point. This human project bringing together many partners around a social issue is still in its infancy ... This photographic exhibition (nearly 40 images) and sound (7 soundtracks) dedicated to be itinerant in the territory of MACS could then find a better launching place than the MOP, place of Orality and Heritage ... A beautiful, sensitive and moving exhibition.


And if we talked a little about you? Self-image, photos, interviews and poetic stories
Photographic and poetic portraits of EHPAD residents Le Royal vert / Notre Dame, Capbreton
By Mary-Luce Pla and Jean Hincker

Mary-Luce Pla, actress-storyteller and Jean Hincker, photographer propose an artistic project mixing writing (voice) and photography (photo sessions) in the EHPAD of your municipality.
The idea is to immortalise eight residents of the EHPAD in Capbreton through these two disciplines and thus draw a poetic portrait of each of the designated models.
Emphasizing autobiography, the models are "treated" with all due respect and photographed with their signed agreement. The written and photographed portraits were made in their apartment. 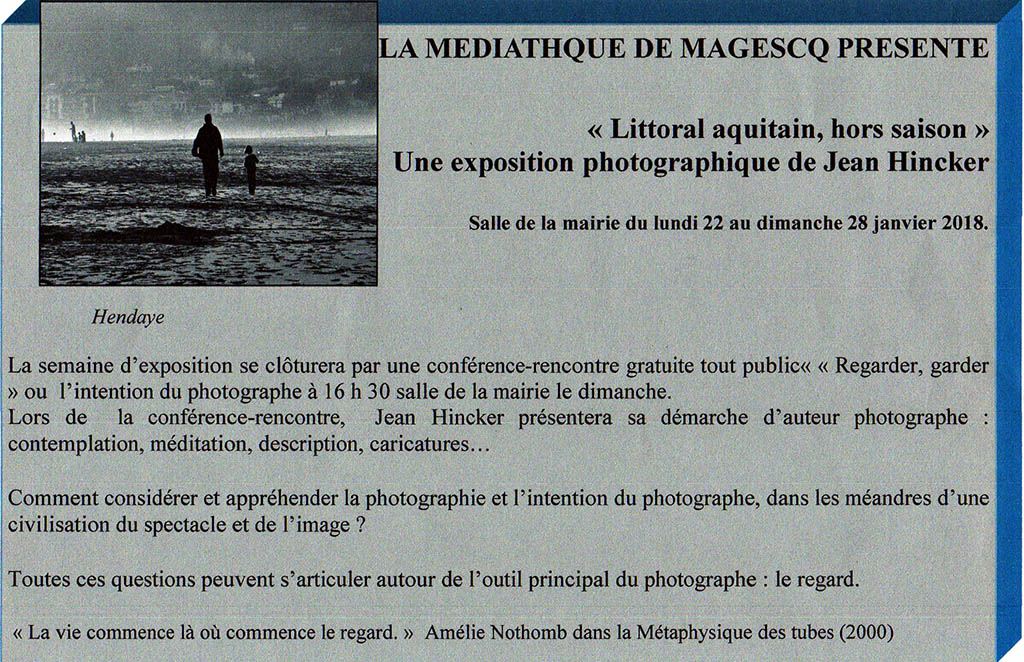